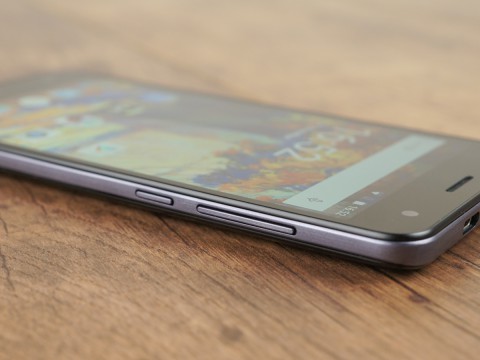 Fly Company has expanded its line of budget smartphones and one of them — an updated model of Cirrus 2. Since this is the second model of the «cloud» family, it is not surprising that it has received the sequence number in a title. Also gadget received a bright ONCELL-screen and Android Lollipop 5.1, rather thin body, good camera, stable «stuffing», support for two SIM-cards, as well as a very nice price. And «another budget smartphone» is beginning to attract attention.

The smartphone comes in a white box of coated cardboard. Appearance is very concise: only few inscriptions with a small glossy belt with the image of cirrus clouds, which gave the name of the Cirrus line. 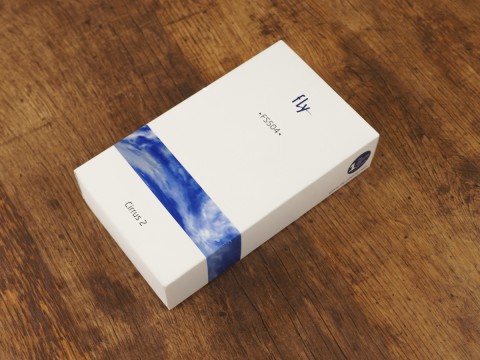 The device is available in three colors — black with dark gray, white and gold. The form of gadget dominates with smooth lines and the design with maximum simplicity. The body has only one image, a company logo — simply and without unnecessary frills.

The front side is covered with tempered glass likeness oleophobic coating – finger nicely glides over the surface, but wipe fingerprints. Above the screen you can find an earpiece and front 2 megapixel camera, lights and proximity sensors. Under the screen there are touch navigation keys without illumination, as well as the main microphone. 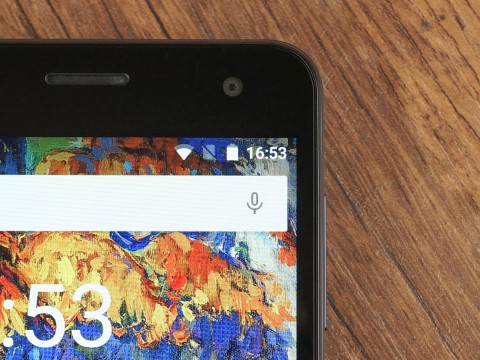 At the top end you will find 3.5 mm audio jack and micro-USB. At the bottom there is only the external speaker.

The left side is free of controls, and the right one is handed with volume rocker and power button.

The back side is covered by a plastic panel with a textured image. Closer to the upper edge there is 8MP camera, under it — the flash. 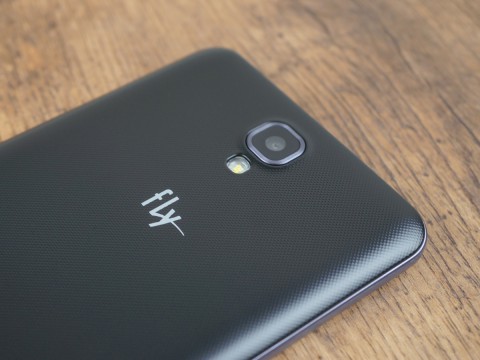 The back panel has removable battery capacity of 2000 mAh and three slots — microSD memory card, micro-SIM and mini-SIM. It is worth noting that the card replacement will fail without disconnecting the battery.

Cirrus 2 dimensions are standard — gadget looks good in the hand and also works comfortably. When talking arm does not get tired, and the top edge does not cut the ear. The weight of the device is small: just 123 grams. But first of all you will be pleasantly surprised by its thickness — 8.1 mm, as for the budget segment it is very good. The rest of the Cirrus 2 presents the usual five-inch smartphone with all the advantages and disadvantages of its form factor: the diagonal allows you to comfortably play and watch, but to sometimes it becomes difficult control the gadget by one hand.

Mechanical buttons motion is soft and quite clear, although there are moments when you do not understand, whether the volume rocker works or not — for example, in the music player. Keys location is usual, but rather «heap», so that at first you will confuse the power and volume button. The touch keys are not satisfactory, as they just do not have enough illumination. No squeaks and backlashes have been reported.

The smartphone is equipped with a high-quality TFT IPS screen with a resolution of 1280×720 pixels (density of 320 dpi) and a special ONCELL technology, which eliminates glare and possible increases of brightness and sharpness. 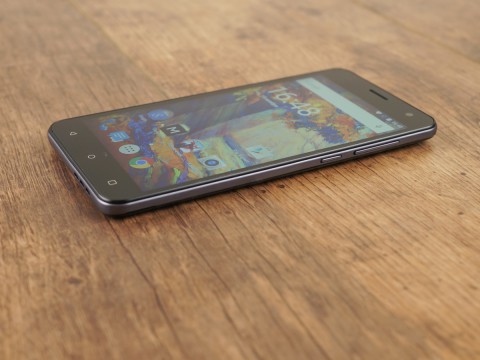 Working with such a display is a pleasure — the image is clear and rich in colors. As already was mentioned, the display surface has a coating similar to the oleophobic — fingerprints can be erased not without difficulty, but it is better than a «bare» glass. Screen frames are quite narrow and in practice they turned out to be quite comfortable. The sensor works off up to five simultaneous touches. 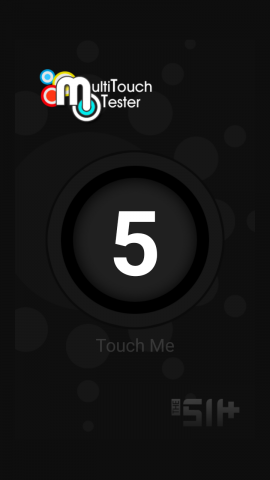 The viewing angles are has maximum value, the screen is slightly «fades» on the sun but the information remains readable. Auto brightness works well and quickly, regardless, you’re indoors or outdoors. 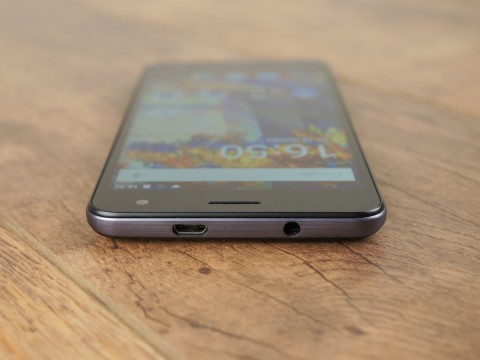 The smartphone runs on Android 5.1 Lollipop without additional skins. 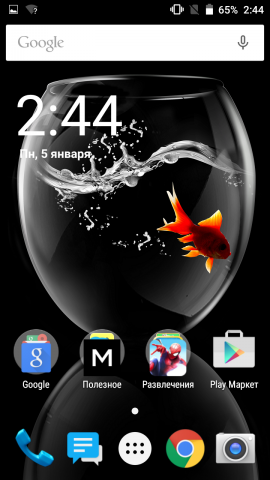 Dialer, phone book and keyboard are standard for this version of the system. 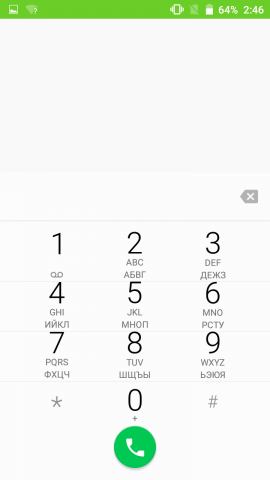 The smartphone is installed with MT6580 quad-core processor with a frequency of 1.3 GHz with 1 GB of RAM. The amount of internal memory — 8 GB and the user can just apply for 4.76 GB. This amount can be increased by the microSD card to 32GB.

Mali-400 MP graphics processor is responsible for video streaming, but the interface work is very smooth, as no stuttering and freezes were noted. Folders menu opens quickly launch applications, and change the screen orientation occur per second.

You can also play in modern games on the smartphone. However, they run for a long time, and the settings are only available on medium graphics settings. For example, Dead Trigger 2 and Lara Croft: Relic Run were successfully installed on the device, but you will need to wait about a half to two minutes to launch them. But in the process of playing there were no crashes and lags. Cut the Rope 2 started in a few seconds.

Zooming in the browser is clear, scrolling works without delays, and the pages are opened in an instant. 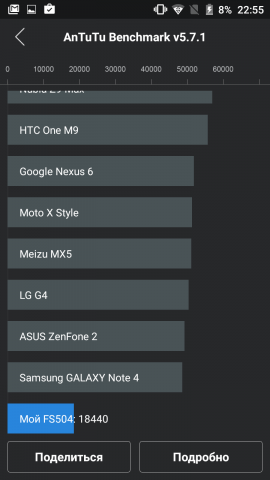 In 3D Mark situation is similar: 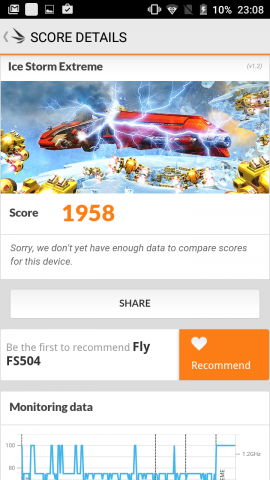 The music player is standard. The sound in the standard headphones is good and if you feel good with its ergonomics, then think about buying extra speakers. But the sound of the external speaker was not so good as we hoped — bass cannot be heard at all.

The smartphone installed with simple 8 MP Autofocus camera, but gadget still makes quite good photos — in most cases automatic selects the correct exposure and focuses accurately. In sunny day, you can achieve very good results, but in the dark you even cannot try to count on high quality pictures. The settings are familiar to Android, and the application is launched in a half second.

Examples of test images you can see below.

A set of wireless interfaces is traditional for smartphone-sector employees. There is a Bluetooth module 4.0, Wi-Fi 802.11 b/g/n and GPS. Everything is stable, but the sensitivity of the navigation chip disheartening. It took more than one and a half minutes to contact with four satellites on a «cold» start. 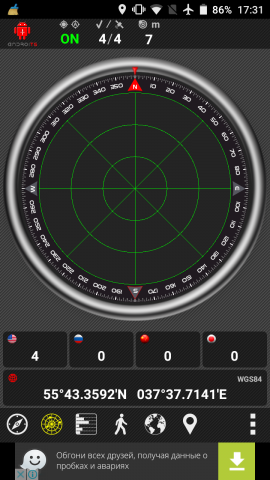 Also, the gadget has a FM-radio.

The Cirrus 2 is installed with removable battery with capacity of 2000 mAh. In Playback mode, high-resolution video at a maximum illumination and in «Airplane» mode the smartphone discharges from 100% to zero in 4 hours 50 minutes.

But if you are not going to disturb gadget for a long time, then with the automatic brightness adjustment it «will live» without charging almost half a day. Mode of such use — about half an hour of calls, minimal use of navigation, about two hours of surfing the Internet and checking tapes in social networks, as well as about an hour for watching video online.

Charging the device takes a little more than two hours from regular adapter.

For the new budget smartphone Fly Cirrus model 2 was very interesting. The slim collected the most popular features on the market: a large and high-quality screen, the latest version of Android, support for two SIM-cards and camera shots make good day, if not the highest resolution. All this, plus the price of 7590 rubles, and you can ignore the offensive performance in synthetic tests.