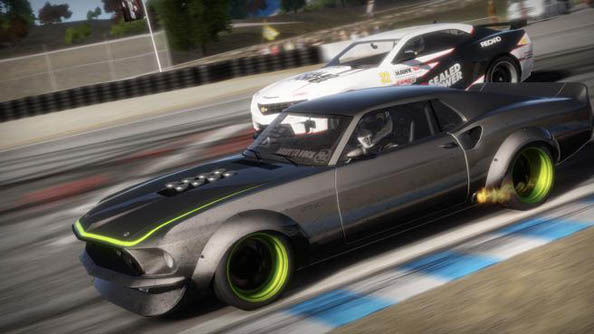 In order to participate in street racing, rally, or even a «Formula 1», there is no need to buy own sports cars and even become a professional racer — just install on your computer the best race game.

It will be cheaper, easier and, more importantly, much safer for your health. But almost as interesting and even fun. Meanwhile, during the years of the creation of automotive simulators there was created a huge amount of races. To at least roughly determine the best of them we made a small rating — top 10 games that gamers have played and continue to play around the world.

1. Need for Speed: Most Wanted

Despite the fact that since the release of the game has been more than 10 years, it has consistently ranked in the ratings, which are considered the best race. Many gamers are returned to the NFS: Most Wanted, even after the new parts of the famous racing series.

It is here that the main task was not just to win races, but to win such a serious opponent, as the police, ahead of them, and even going to ram. And the more important the race, more serious the police cars.

Split Second is not the newest game, but nevertheless one of the most interesting racing PC. Unlike the three previous participants of the rating, it can be conducted without a network connection — but there is also a multiplayer mode that allows you to compete with your friends.

It is not only a race, but a real TV show for the adventurers. And the main task of it is not on track to overtake the enemy, and its physical destruction. At the same time each player has the opportunity to not only crush the enemy or throw into the abyss, but also give him a trap with the help of special abilities, accumulated in the course of arrival.

The game can be called the best simulator on the PC racing. As you progress through the various missions the player must perform as many tricks can be dangerous, for which he will be added scores and open up new opportunities.

The simulator has a single-player and multiplayer modes, so you can compete with friends. A great graphics enables more and enjoy the beautiful landscapes of the game world.

If during the race you have ever wanted to not only beat the opponent, but also crash all guardrails or boring billboards, while earning points is not less than the lead in the competition — Burnout Paradise is a game for you. And, you can choose a unique vehicle — such as the car, «Formula One,» or really crazy route, which an experienced gamer can pass only.

The representative of the classic series of NFS also refers to games that do not require the internet, and is perfect for those gamers who prefer to take the route, competing only with a computer.

However, since the game is still a modern, multi-user mode without no cost. However, even the game alone will not leave you on the highway one — about 200 cars participating in the competition.

During the race, the player will have to overcome a great distance, having passed through all the States — from San Francisco to New York. A crucial difference from all previous NFS is the possibility of the player out of the car, which makes the game a bit like the GTA series.

Track Mania 2 project is on the list of the best simulators for the opportunity to participate in one race up to 200 cars. And yet — for the tremendous popularity as of today in various parts of this series plays more than 3 million people.

Development of the plot in the game Driver: San Francisco makes it look like a science fiction film, and at the same time on the race for survival.

During its passage you will play for a bandit, because getting into a car accident received Superpower — transmigration of the soul into the body of any motorist. This player can manage all vehicles, except for transport rivals. The point of the race — the destruction of all opponents. A major advantage over most other races — a huge length of roads and the lack of restrictions on movement.

Flat Out 2, which is a continuation of an older version, was released a few years ago. But it is still popular in our time. Not in any other race on the PC, you can find the same drive and the ability to understand an opponent.

The popularity of the game Test Drive: Unlimited, 2 is provided by three benefits:

The lack of a strict plot, requiring mandatory implementation of some actions and passing the mission;

Changing weather conditions and their impact on the controllability of the vehicle.

Dirt 2 can be called a classic rally simulator on the road. And among the cars, which can use the player here, only the corresponding transport — SUVs, pickup trucks, buggies.

An interesting feature of the gameplay — the ability to rewind the game back for another attempt to pass a complex plot.

The main task of the player when riding on the road is not the speed, bu agility. Here it plays the role that the practice of Dirt 2 will provide players the opportunity to easily take turns and obstacles in any other simulator.