The Stunt Race Creator expands the possibilities of the GTA Online Race Creator
by adding hundreds of Stunt Props and new features, enabling the amazing Creator
community to unleash their talents in a new era of player-made racing mayhem.

While the Stunt Race Creator bears many similarities to the Land Race Creator, new
creative tools including moving props, audio cues, RP boosts, and speed strips
radically change the kinds of races you can make, opening up a new universe of
opportunities for creators and players alike. This guide offers some general tips to get you started on constructing and sharing your very own Stunt Races.

Creating Stunt Races follows the same framework as creating races by Land, Air,
and Sea; prerequisites include details such as a race title, description, and photo,
and you’ll need to define format options such as race type, route type, available
vehicles, etc., as you would with all other races. 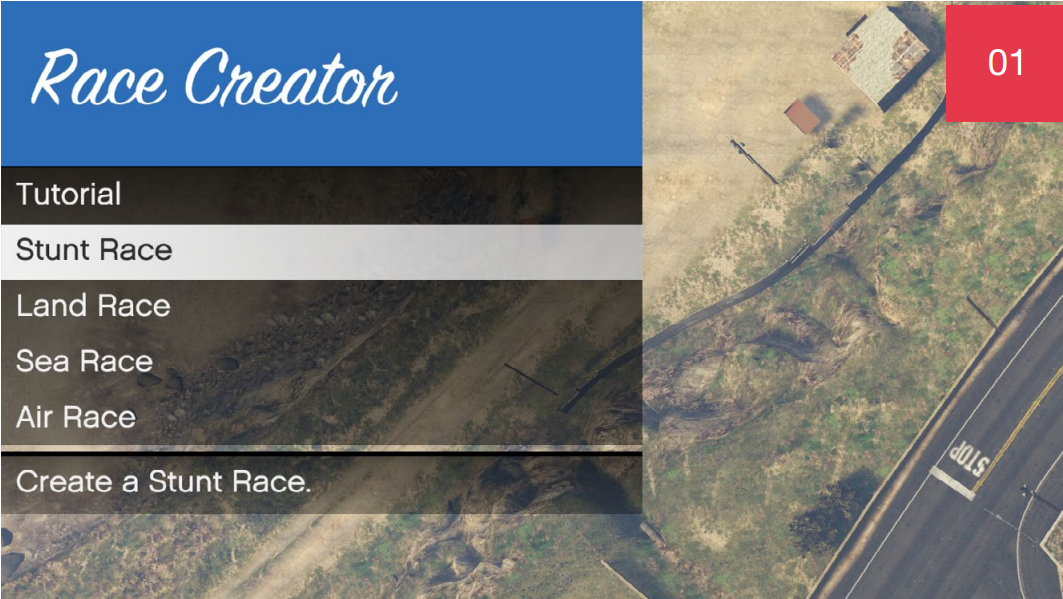 For a detailed explanation of race details, visit the Social Club for the
Race Creator Guide. 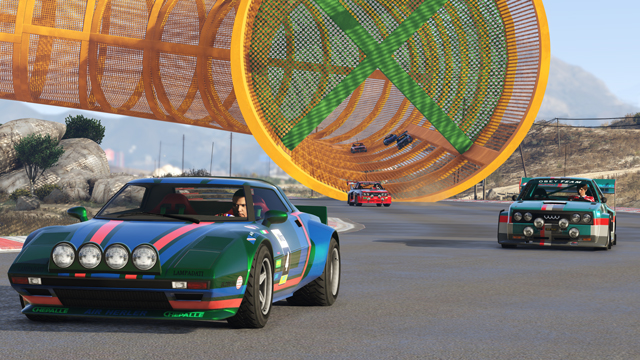 With your race details in place, it’s time to start laying out your Stunt Race course;
in the Race Creator main menu, select PLACEMENT. 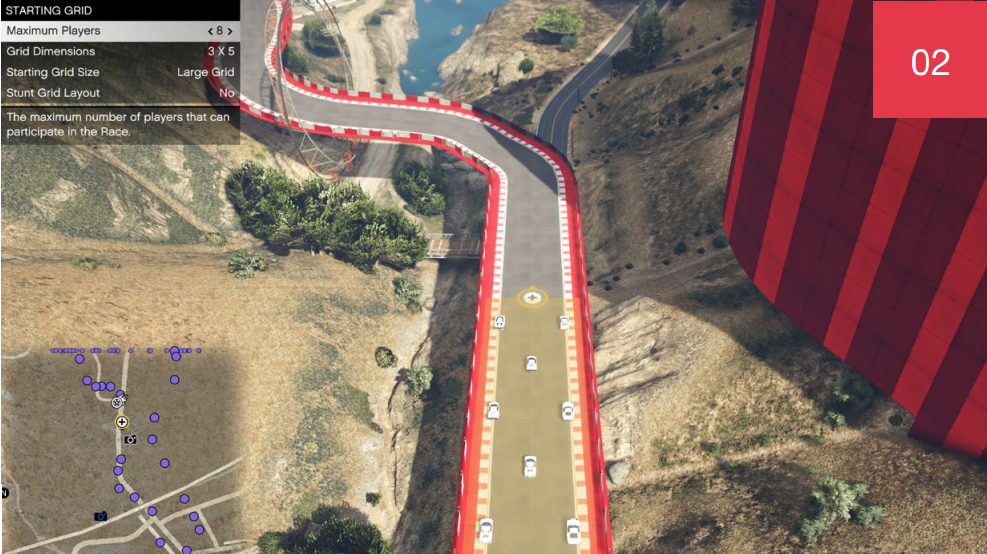 Like race details, placement prerequisites follow the same format as creating any
race02; you’ll need to drop the race trigger, lobby camera, and checkpoints. From
the placement menu, select Props to tap into over 500 Props, including new and
exclusive Stunt Props. 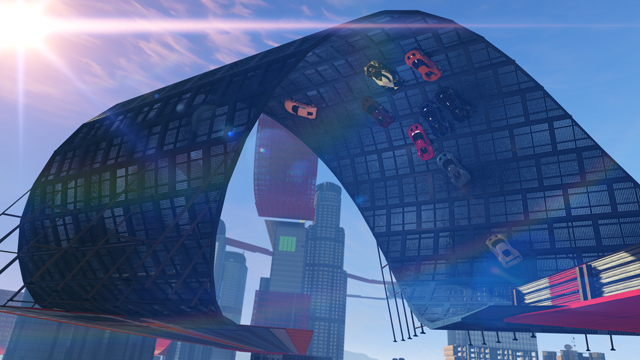 Stunt Props are the building blocks that make Stunt Races a class of their own
– in fact, when a Stunt Prop is added to any created Land Race, it automatically
becomes categorized as a Stunt Race.

Stunt Tracks include starting grids and a variety of roadway types to apply to your
course. Use tracks for your start/finish straightaways, or connect your course with
straights, bends, and turns of varied sizes. Tracks can also be used to channel
racers through forks, narrow the racing field with funnels, or challenge racers with
chicanes and obstacles. 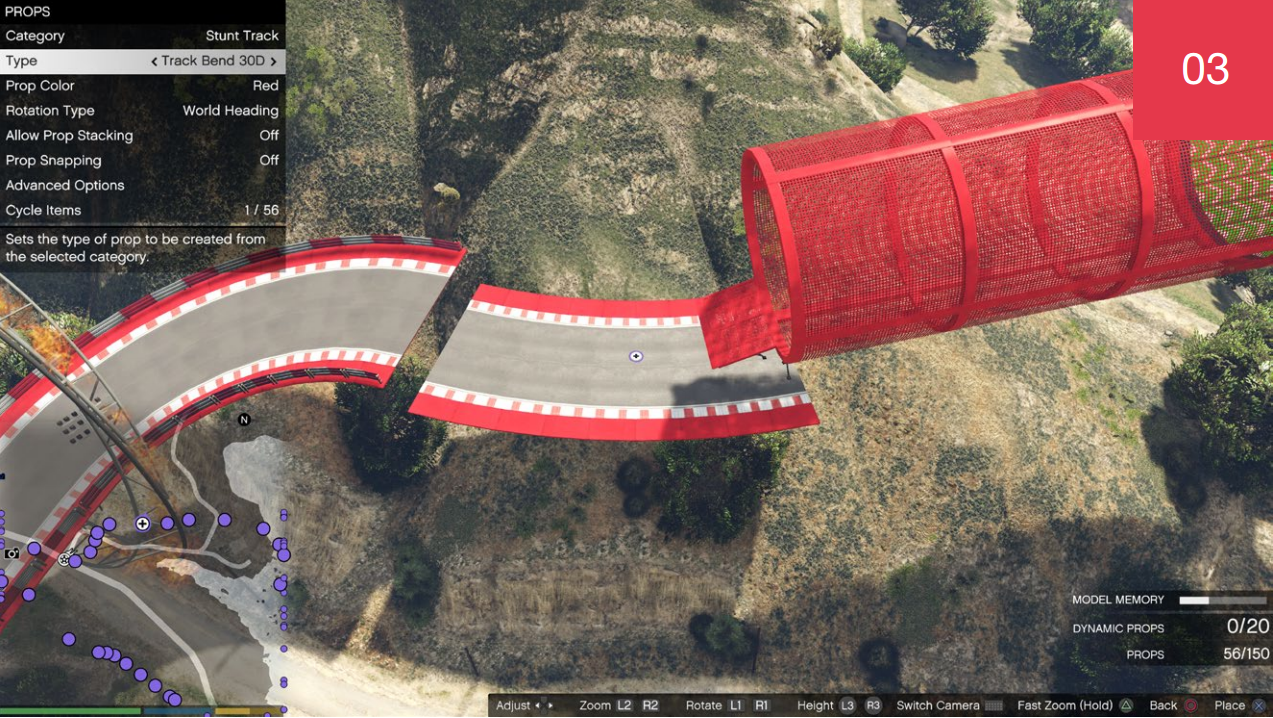 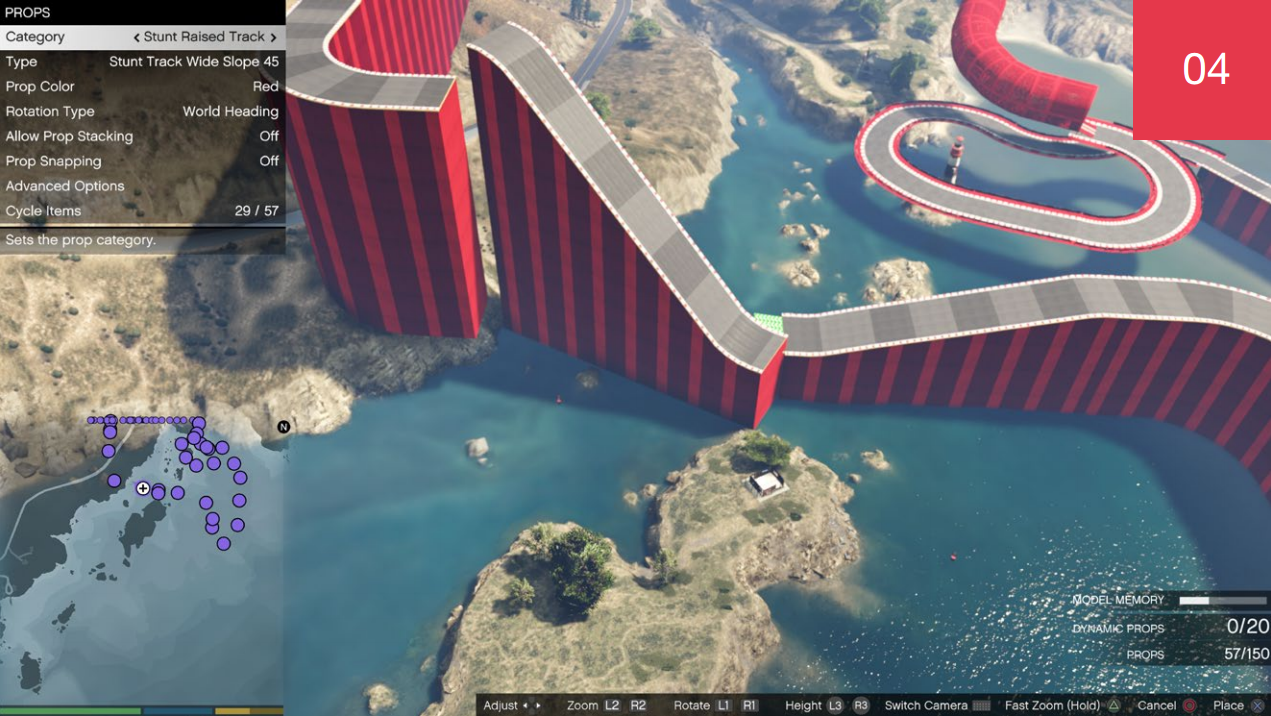 Use Stunt Tubes to enclose players and give them a 360° range of motion. Tubes
can be connected to climb high into the air, circle skyscrapers, or create spiraling
plummets. Connect tubes with tracks using the Track Tube Blend or Tube Entrance,
add extra propulsion with the Tube Speed Boost (limit 15 per race), and use Tube
Gaps and rotating Tube Gates to add extra challenges for racers. 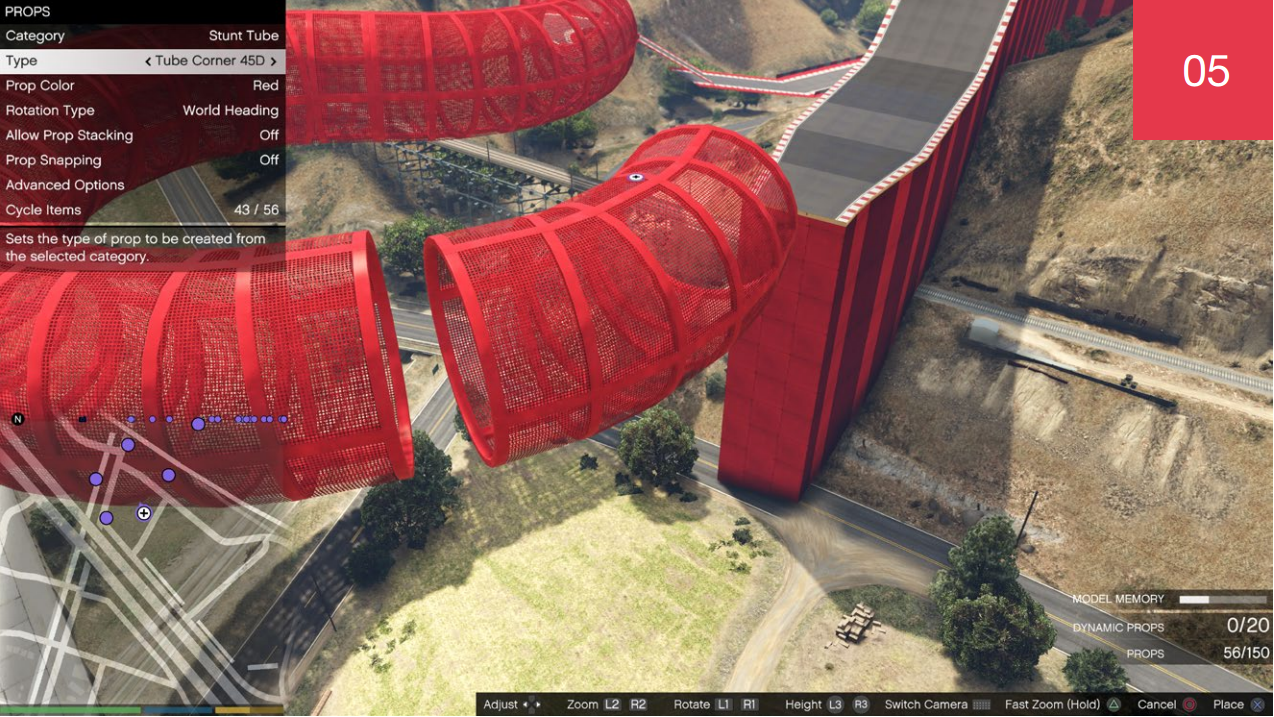 Add level ground or give other Stunt Props an anchor point using Building Blocks, which are flat, square foundations that come in a variety of size configurations and colors. 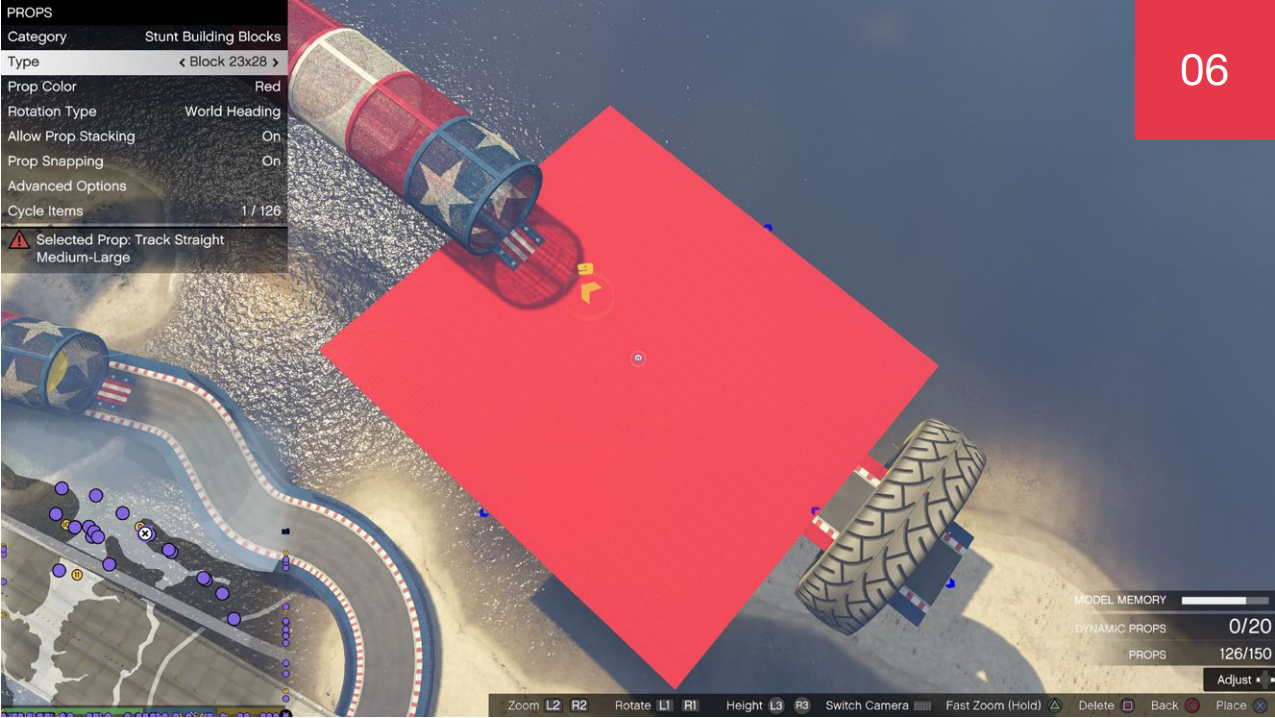 Ramps vary in size, width, trajectory, and functionality, and offer jumps or flips
that can be used to create gaps, tube entries, or stunt camera moments. Ramps
also include giant quarter pipes that can be used for wall-riding moments and lend
verticality to your track, while Giant Stunt Ramps can offer massive ascents and
plummets, vastly changing the pace of your course; be sure to consider speed
boost and slowdown props to manage the pace on Giant Stunt Ramps. 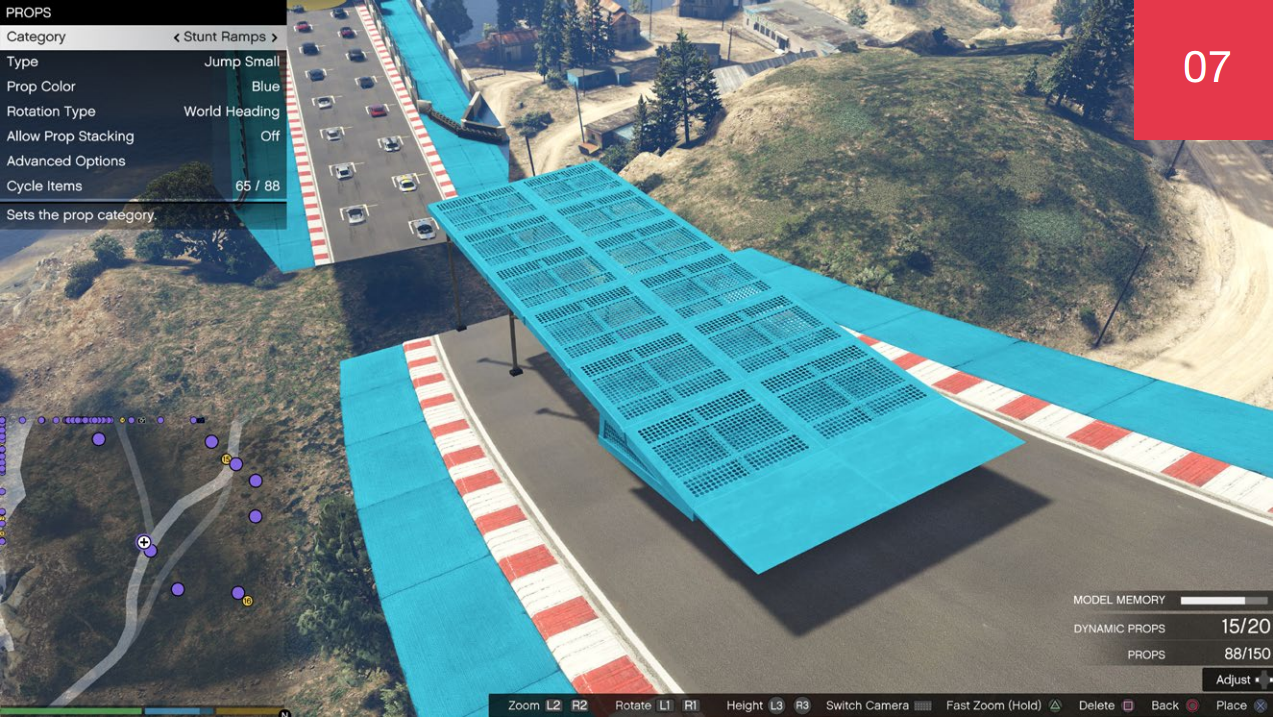 Force racers to harness speed and momentum to flip them on their sides or
completely upside down with spirals, loops, and wall rides. Some wall ride options
include ramps that channel racers into them, while others will require your own
transitional build. 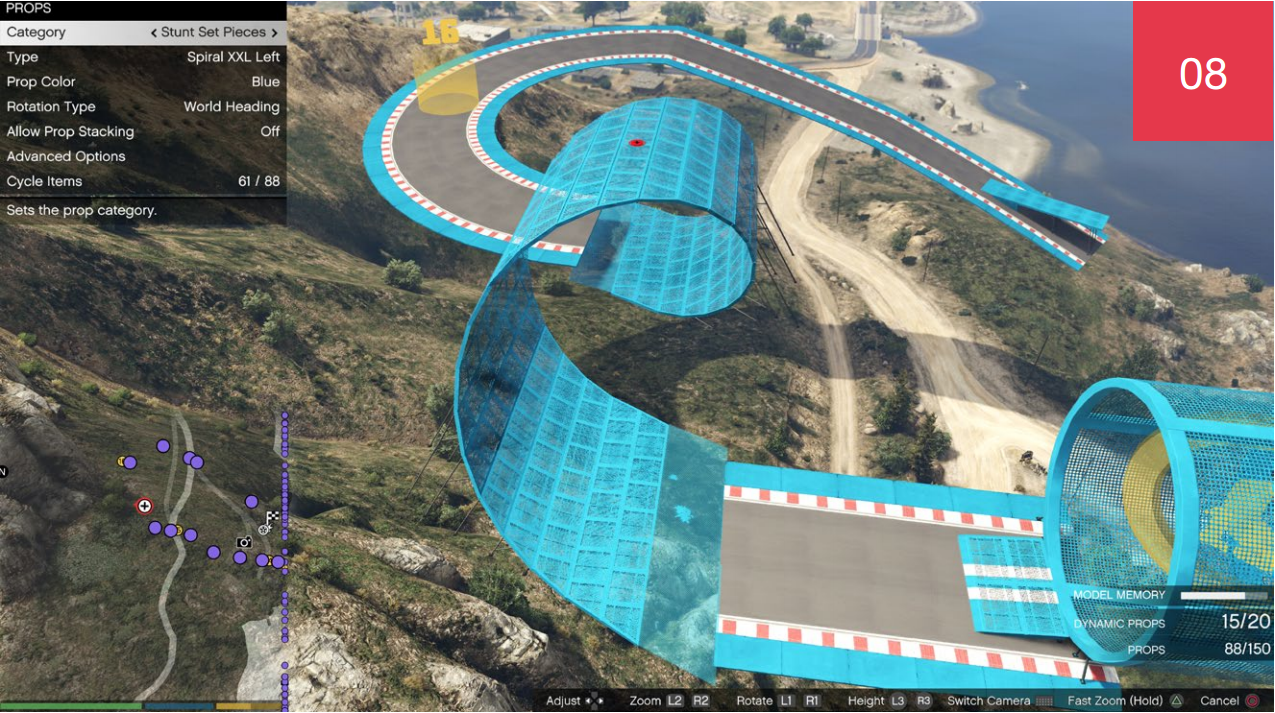 While moving Signs can create obstacles for racers, they can also create barriers
or communicate direction for racers speeding through your course09. Use Signs to
indicate turns of varying severity, upcoming obstacles, or rapid shifts in direction.
Or, shamelessly brand your course with Los Santos’ favorite racing brands and
sponsors. 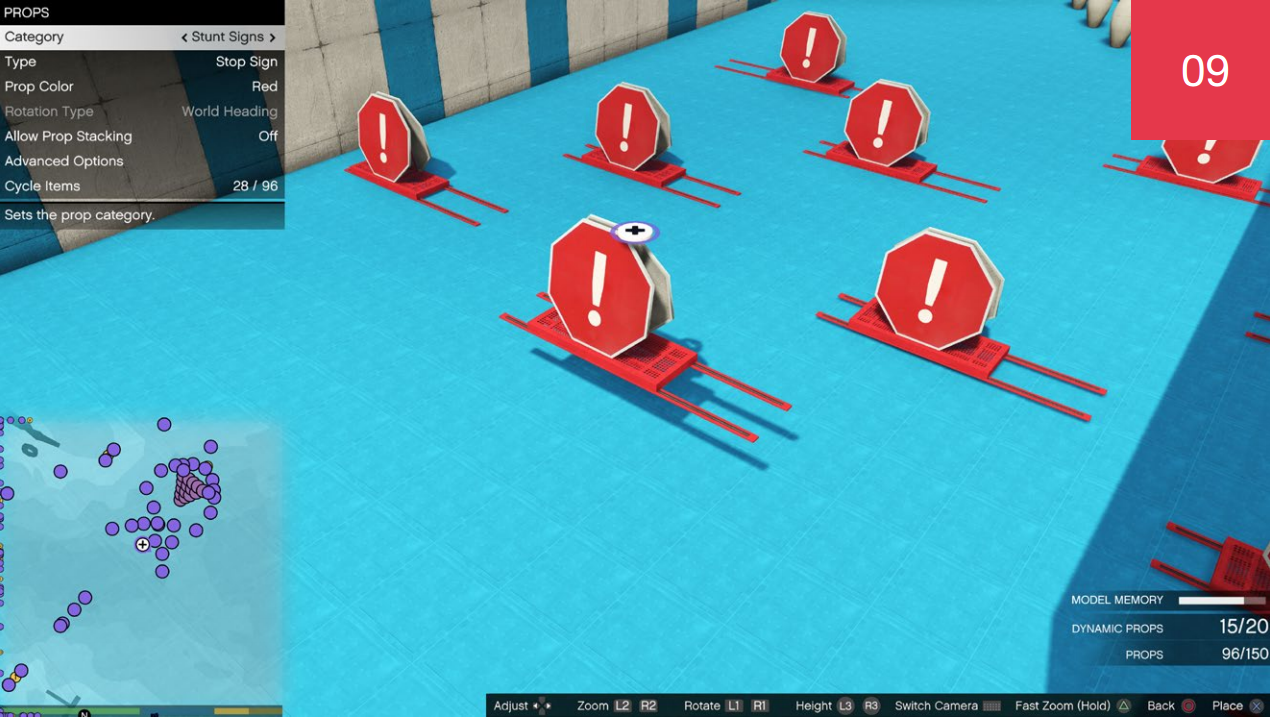 Special props include speed boosts and slowdown strips to govern speed, along
with set decorations like rings of fire, fireworks, giant tire hoops, and gantries10. Use
audio cues like the PA System to alert players to upcoming jumps or obstacles, or
create landing zones with Stunt Targets. 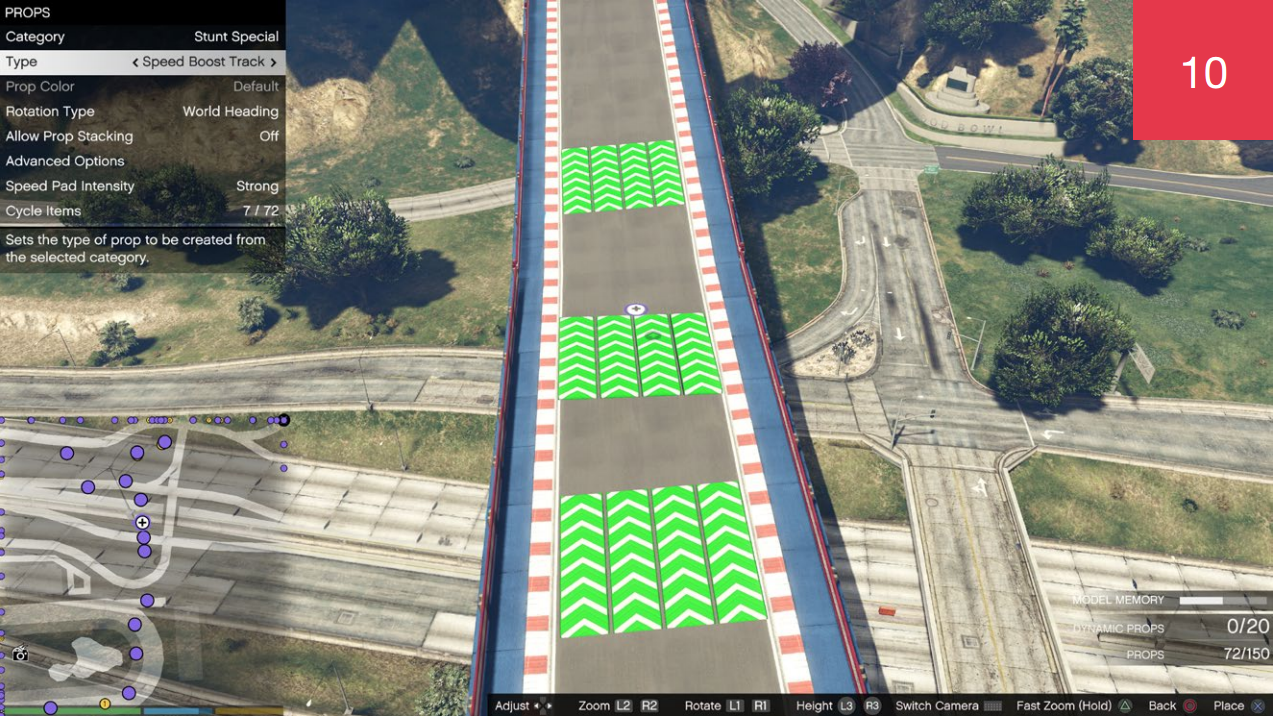 The Dynamic Prop menu expands with new Stunt items as well; add Giant Bowling
Pins or Soccer Balls11 to add a little chaos for players to navigate, while also offering
the potential to collect RP for targeting specific props (and creating chaos for those
in their wake). 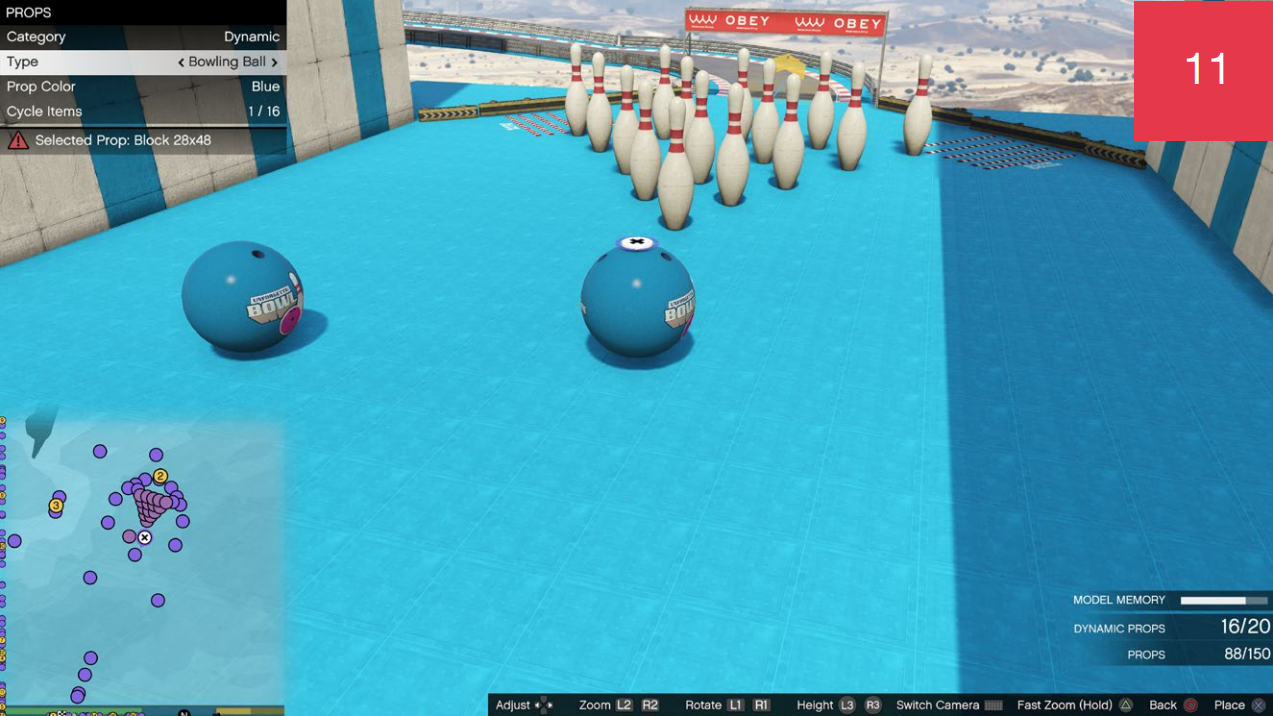 Along with Stunt Props, the Race Creator adds many new improvements to enhance
your custom Races, most notably the option of ‘prop override’ for finely tuned
placement and prop snapping.

In addition, the prop limit has increased from 100 to 150 props per race, and
features like vehicle boosts, circular checkpoints, and secondary checkpoints lend
new creative options and solutions for creators.

Override options allow creators to place props with exact control like never before;
where uneven terrain or world structures would make prop placement difficult,
Override allows users to finely tune the exact position and rotation through X, Y, and
Z dials. In the Advanced Options section of the Props Menu, creators can select
Override Position or Override Rotation to precisely maneuver a prop into position. 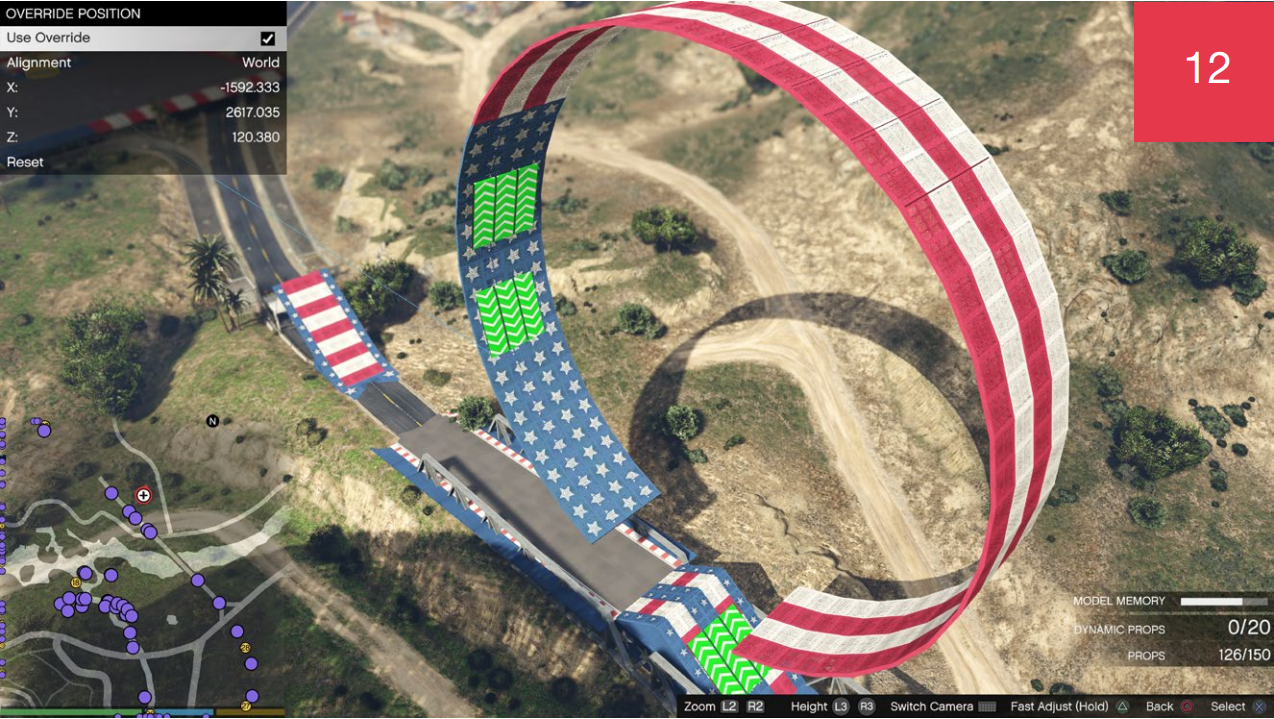 Override, snap and stack options. Prop Snapping allows creators to quickly snap building blocks, stunt track, stunt raised track, and stunt tube props to one another in various ways. Prop Snapping also offers advanced options with toggles to automatically snap props by proximity when their ends are almost touching, manually trigger a snap, or create chain snapping where the next prop is immediately snapped to the last; after a prop is snapped you can still utilize default prop movements such as rotation of pitch or yaw. Prop Stacking, a previous addition to the Creator, enables props to be stacked on top of each other, placed on uneven surfaces, or overlapping other objects. 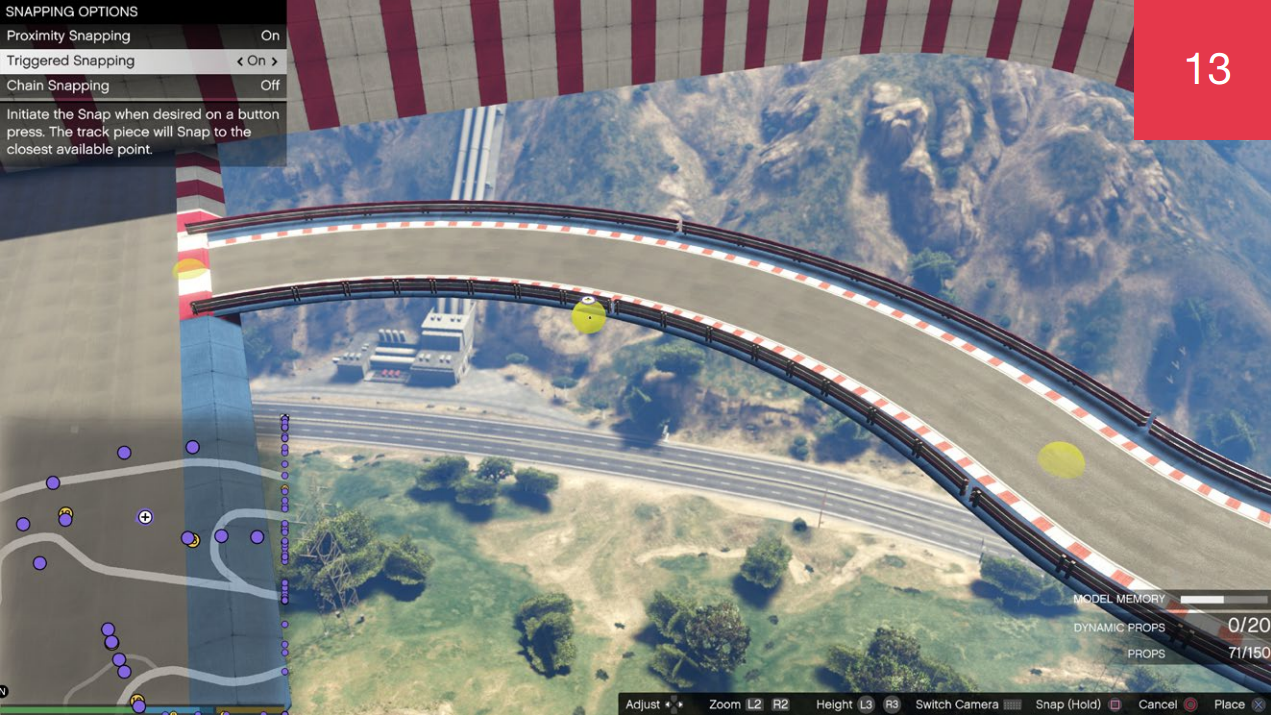 In addition to traditional ground-level checkpoints, creators can take large circular
checkpoints – similar to the checkpoints seen in Air Races – and drop them in land
races. These are especially useful when using Stunt Tubes, or when launching
racers through the air. 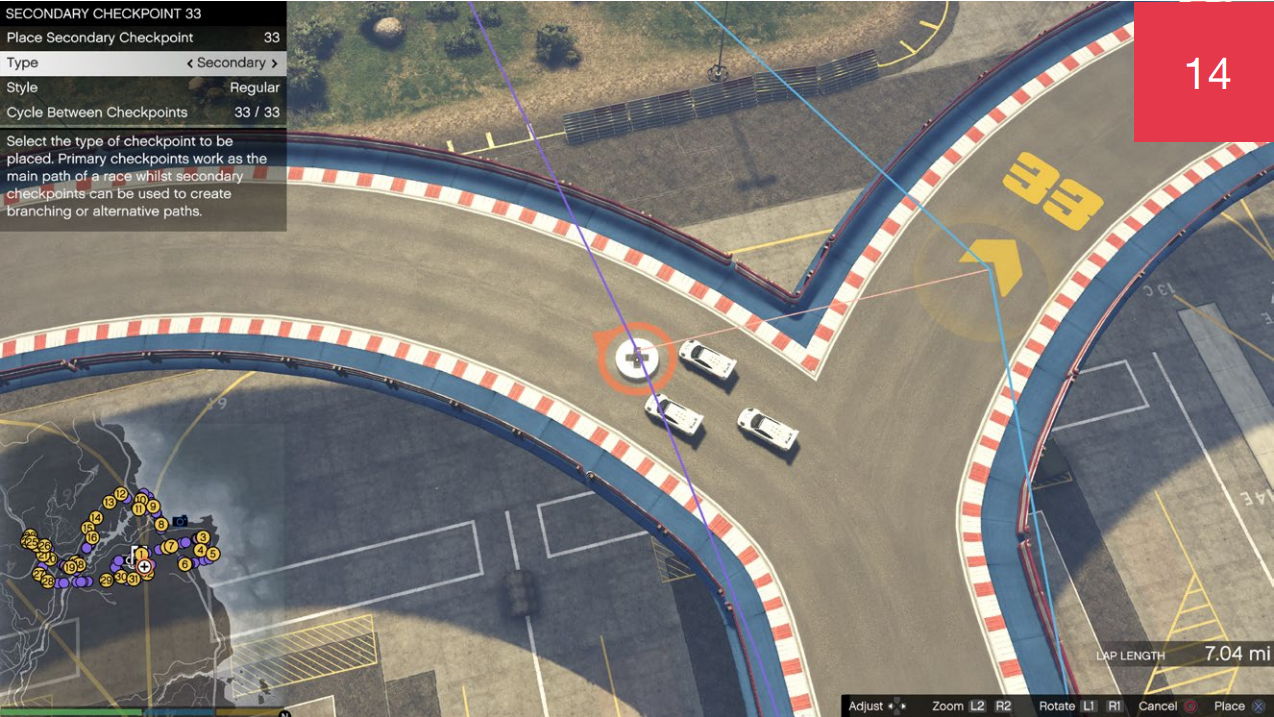 In addition to traditional ground-level checkpoints, creators can take large circular
checkpoints – similar to the checkpoints seen in Air Races – and drop them in land
races. These are especially useful when using Stunt Tubes, or when launching
racers through the air 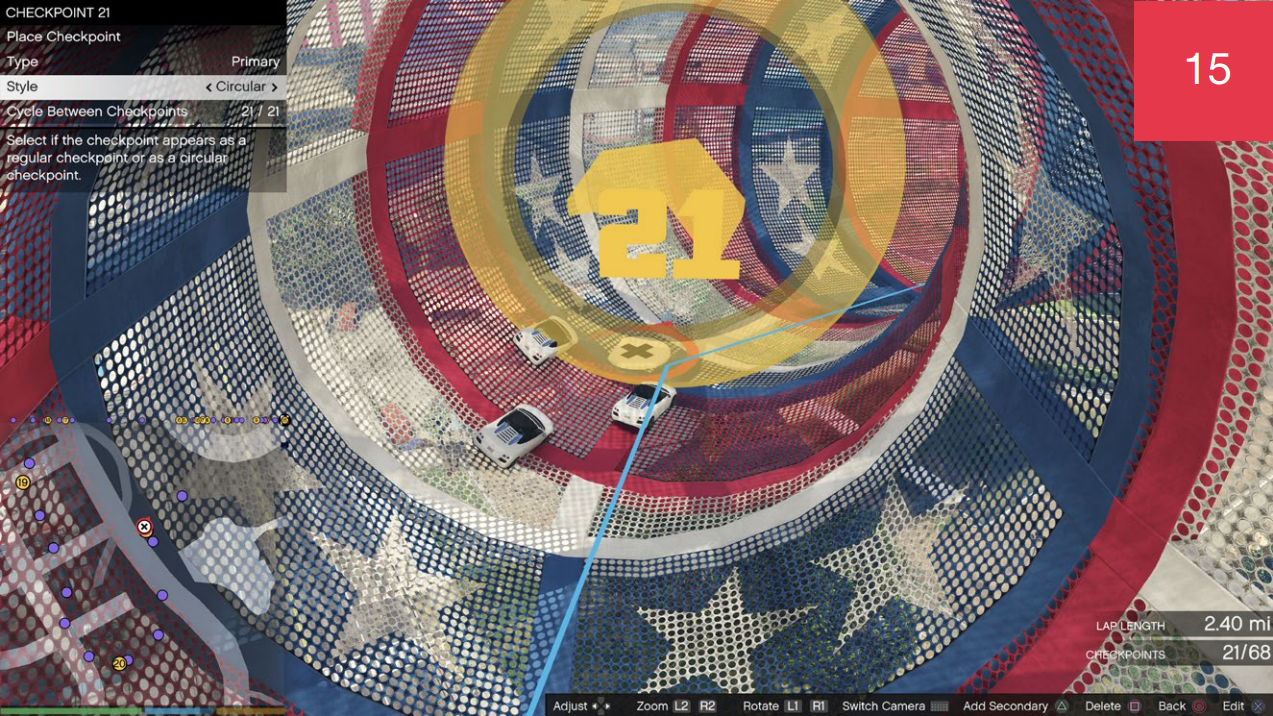 A full test drive must be completed before you can save or publish your Stunt Race;
note that all routes, and checkpoints, will have to be tested if your race contains
divergent raceways with separated paths. If any changes are made to the Race after
you have tested it, then it must be tested from the beginning again. Not until you
have tested from the start to the finish line without making changes can the Race
then be published.

Save your Race creation at any point and reload it to continue making improvements. Saved jobs must be published before they will be available on the Rockstar Games Social Club.

Publishing your Race sends it to the Rockstar Games Social Club. You can publish
your Race after completing your creation and successfully testing it from start to
finish without making additional changes — for Races with secondary checkpoints,
you’ll need to test both routes.

It’s possible to publish your Race without saving first, but it’s wise to also save a
version of your creation; this double backup method makes it less susceptible to
data loss. When you return to your Race to continue making improvements, you
can load your Race from the published version of the Job on Social Club.

Please note that making changes to the published version will reset all of the stats
associated with your original job.

Far Cry Primal Guide — List of all the animals th...

How to get rid of Rockstar online policy check in GTA 5...

Fallout 4 guide: how to set up mouse movement