» Games » How to play for Sombra in Overwatch?

How Sombra hacks? How actually works her Ultimate? Who Sombra contras and how to play with her at all? This guide answers all these questions.

Sombra refers to the aircraft attack. Formally. In fact the attack out of it the same as the symmetry of — support. Sombra does not make that amount of damage for a few seconds, such as Tracer. And this is despite the fact that they are in some ways similar — rapid-fire weapon, designed for short distances; the ability to teleport, a little health. So what’s the difference? The objectives and priorities in the battle of the two different characters. While Tracer — attack, flanger, Sombra same … combines the features and support for the assault. But first things first.

Thus Sombra is neither initiator nor killer. She — opportunist.

So in the following:

Sombra manipulates the battlefield to give yourself and your allies an advantage in battle, helping them win the battle alone. Yes, Sombra can deal good damage, but most of the characters simply surpass it in this indicator in alone clashes. But how about to leave enemies without the benefits and reduce their chances of survival when they are injured, attacking from the back?

If this kind of fight is not for you — close this guide. 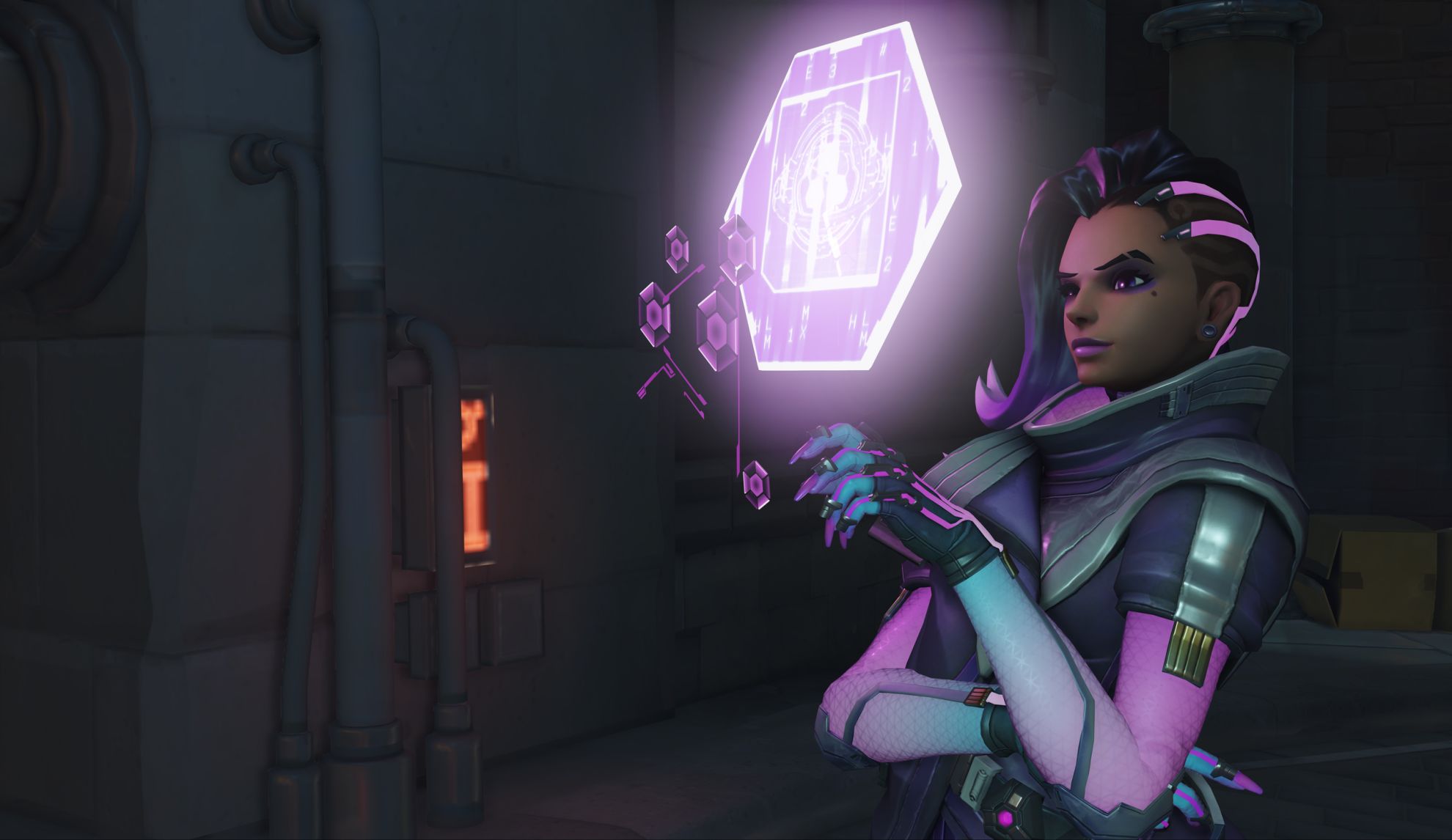 DPS: 160 (assuming that all the bullets hit the target)

There are two rules for the use of weapons of Sombra. The first rule — to be close to the enemy. The second rule — make sure that the enemy is moving.

Its sub-machine gun does not recoil, making the weapon rather simple to handle. But compared to the Tracer causes only half of the final hydrocarbon. High spread means that shoot from a distance, as well as constantly hit in the head will not work … well, quite near, perhaps. It is for this Sombra like Reaper forced to fight, being quite close to his opponent.

Sombra breaks enemy, temporarily not allowing him to use abilities or Medkomplekt, making it useless to the enemy.

Duration: 6 seconds on enemies, 10 seconds on the turret Torbjorn, 1 minute to the first-aid kits

Hacking can use their passive abilities. In other words, despite the hacking: Genji can jump twice; Reaper can knock out enemies and collect their souls; Torbjorn can collect scrap (but do not make armor).

Sombra for a short period of time becomes invisible, and her movement speed is increased significantly. If you use offensive abilities, applying or taking damage camouflage removed.

Deactivation Time: 0.5 seconds (during exit inviz can only move)

Getting off invisibility. The invisibility to the enemy coming too close, he will see the shimmering silhouette, warning about Sombra nearby. When he saw the silhouette, the enemy is likely to begin to shoot at everything around. And yet you can not use stealth emotions 🙁

Tip: Always use invisibility to escape from the battle, the enemy will just shoot at his heels. Therefore, before activating the ability to better find shelter. View a corner, for example.

Sombra throws beacon-translocator. While the beacon is active, it can instantly be transferred to it (even if it hangs in the air).

Duration: 15 seconds to teleport to the beacon, otherwise it will disappear

Tracker does not need to appear is in the area to teleport to it. Translocator not disable invisibility. Light can not be destroyed.

One of the best ways to use the translocator — leave beacon, enter the invisibility Activities murder priorities and then teleport back to the Allies / medicine cabinet before the beacon away.

Tip: It is a good idea to leave the beacon behind opponents, especially in the large first-aid kits, by pre hacking it. Plus translocator being behind opponents allow during kneading teleport and attack them from behind.

Sombra emits a pulse of electromagnetic energy that destroys shields and barriers in a large radius and hacking all enemies caught in it.

Triggering conditions: the enemy shall be 50% of the total stock of health

Tip: when due to the ability seen a wounded enemy, leave in place translocator beacon and invisibility run to the goal that would deal with it, then teleport back. Mission Complete! 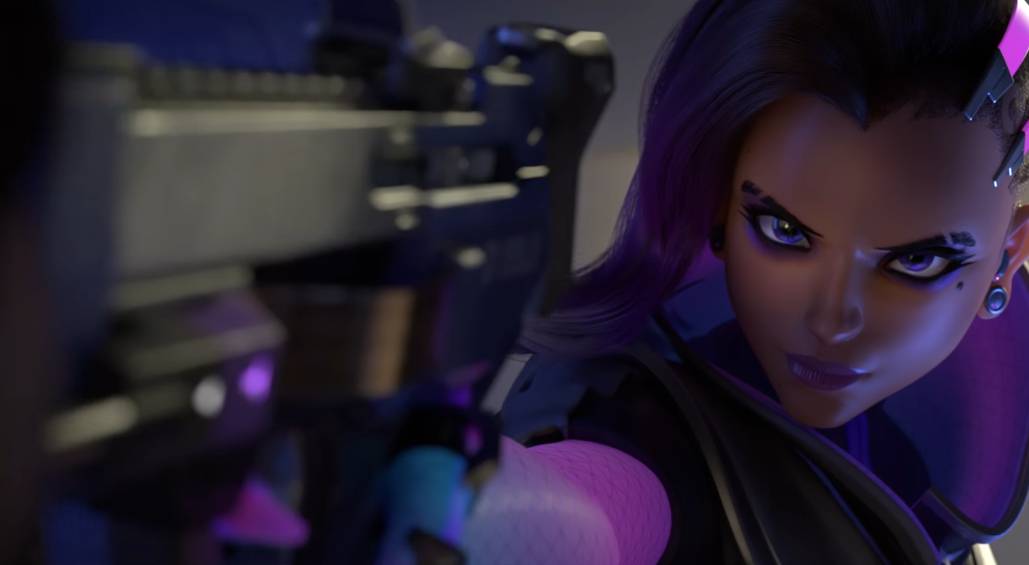 Hacked Genji is not able to make a breakthrough that significantly limits mobility so important for him. Instead of having to shoot on it (it will be embarrassing if the bullets will fly back in the face, not it is?) Is better to hack it at the time when he is attacking someone. Sudden deprivation of opportunities to do a jerk / reflect the shots could potentially have a negative impact on his health.

Hacked McCrea will not be able to throw a grenade-school, but the weather will not make it. So it is better not to fall into the field of view of a cowboy and stay behind him. As his ult is streaming, timely hacking Ulta McCrea can save lives allies.

Sombra Enemy №1. His ult is impossible to crack. However, stealth Remote Control will not monitor Sombra. He did not cease to sprint if hacking was made during the sprint. Sombra can take it unless cunning — to finish when he is low on health, or to try to correct it close while he is distracted. In other situations, a soldier on Sombra advantage. It is better to avoid it.

It hangs in the sky will not disable (Passive), but deprive it of the ability to quickly gain altitude / manual fire a missile can be. It makes no sense to shoot it while it’s in the sky, those bullets that fly so far will cause little damage, but in the response will be painful.

Hacked Tracer = Tracer dead. But do not even try to crack it into battle alone. It’s impossible. Playing against Tracer is better to try to hack as much as possible first-aid kits, it is very angry.

It is impossible to crack in the form of shadows. However, after the break, he can not fly, and given that invisible ability is only way to escape … As McCrea, the Reaper can decide the fate of Sombra two shots.

Its Remote Control can be broken up, as long as he has not released the arrow. Hacking Hanzo after he used his ult will not cancel his actions. Sound boom Sombra able to detect when it is invisible!

Her Ultimate nullifies the effect of invisibility. If McCrea and Reaper may deal with Sombra for the two shots, the widow can do it in one. Its quite difficult to catch because if it teleport / inviz ran into it just giggling fly via cat-hook and as a bonus leave his poisoned mine. It’s definitely one of those characters whose Sombra is to be feared.

Unpleasant for Sombra matchup. Breaking and EMI did not act on her stimulator. Her biotic grenades guaranteed Sombra withdraw from the mental equilibrium (and invisible). And if that were not enough … getting into Sombra soporific dart = death. It is best not to fall into her eyes if something is not busy.

EMR will not be able to cancel his ult, but disable the turret if it is nearby. Purposeful hacking a turret makes little sense, it is very rare and is not justified in most cases the possibility. And then, if you Sombra managed to crack his turret, he knows about it and can just put a new one.

Sombra has nothing to do with the already Activating Ultimate for D.va. However, the sudden breaking in the thick of the battle will not leave eaters Doritos chance of survival.

Charge can be interrupted in a timely burglary. You can not hack anyone standing in front of his shield. However, EMI can destroy the shield and as a bonus will crack everyone who was behind it. The situation with his Ultimate is the same as with Mei, alas.

Its Remote Control can not be stopped by hacking, but can be stopped by EMI. EMR also eliminates the effects of his Ulta, destroying billboards.

Her hacking will not give anything. Teleport and the turret can not hack. Turrets do not respond to the invisible Sombra.

How do I become a good scout in World of Tanks?

Far Cry Primal Guide — List of all the animals th...

How to fix the character «stuttering» issue i...

What kind of ammunition is there in World of Warplanes?...