You want to update or install an application from the Google Play Store, but the device issued to you information about the error 905 — «App could not be downloaded due to an error. (905)»? In recent days, such troubles occur in a fairly large number of users, so we decided to look into the situation and look for methods of solving this problem. 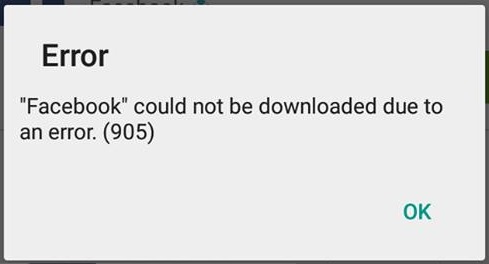 The fact that the application, games, books, music and movies store from Google corporation, which is called Google Play Store, constantly expanding, offering users more different content. As you add new positions, especially in such large quantities, failures may occur, despite the constant work of technical support services. Usually, downloading and installation of applications runs without problems, but sometimes not everything goes smoothly. At this time error 905 appeared in owners of several models of smartphone and different manufacturers. Currently error 905 was seen on Samsung Galaxy S5 and S6, HTC One M9 and Sony Xperia Z4, as well as some other Android-devices. Even this list of «victims» becomes clear: the error 905 isn’t connected with smartphone applications and the problem lays Google Play.

As a rule, error 905 appears when working with Google Play, where you want to install or update the application. Downloading goes well and then during installation an error message pops up on the screen: «App could not be downloaded due to an error 905». You can get rid of it in the following manner:

Typically, such a chain of steps solves the problem with error 905 and it no longer appears. If you know any other options for correcting the error, share them with our readers — they will thank you for your help.

Video show you how to fix google play store error 905

How to fix error 489 in Google Play Store

How to fix Error 101 in Google Play Store

How to Fix Error 506 in Google Play Store?