After running the Android 5.0 Lollipop update some devices faced a new problem using the Google Play Store. When you try to install an application from the store smartphone or tablet displays the message: «Unknown error code during application install: -505». For the convenience of further narration the problem will be called «error 505». This is one of fairly common errors that can occur when you install the application. Moreover, the game is downloaded without problems, and just does not wish to be installed, as reported by Android-powered device. 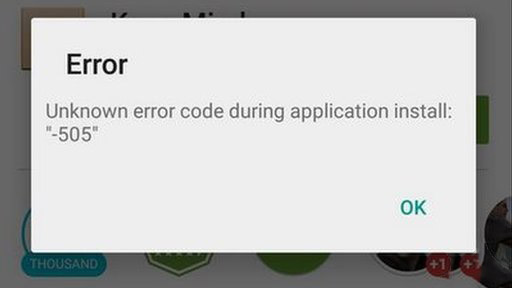 Judging by the complaints of users, problems with games installing on Android 5.0 Lollipop appear on the device for the most part with the applications that are installed «on air» via Adobe Air. Popular applications (RedTeam, Bingo Blitz, Evernote and many others) have their own icons that are lost when you update the operating system. As a result, there is the same «Unknown error code 505» when you try to reinstall the existing component.

How it happens: Application icons are gone. When you go in the Google Play Store, it offers, in particular, applications that are hidden and not uninstalled (removed) from the device. Trying to remove hidden applications will not succeed — they are not visible and it is impossible to select them for removal. When you try to re-download and install that same invisible device the program will display «Unknown error code 505».

Solution: if you have you received OS update for your device «on air» to version Android 5.0 Lollipop, perform the System Restore, or make a factory reset. This is guaranteed to save you from the «Error 505». And do not forget to clear the cache by following the path Menu> Settings> Applications> Google Play Market> Clear cache. Clean the data similarly.

In case after a reset and restore the system you reboot the device and the error still persists, try another way. If you use Adobe Air 15, try to use Adobe Air 14 and create an APK package, which contains both the application and associated runtime version of AIR (captive-runtime). With high probability the problem will be solved.

If you are familiar with the Android Debug Bridge, use it to uninstall the application (if they are just hidden and not completely uninstalled), and then try to install it again from the Google Play Store.

It’s only emergency measures that can be taken with «Unknown error code 505». Let’s hope that application developers will soon find out the reason of incompatibility of software and radically solve the problem.

How to fix application install error code 961 in Google...

How to fix Error 101 in Google Play Store

How to fix «app could not be downloaded due to an error...

How to fix error 489 in Google Play Store